Free shipping on all orders in Greece & over 149€ worldwide. 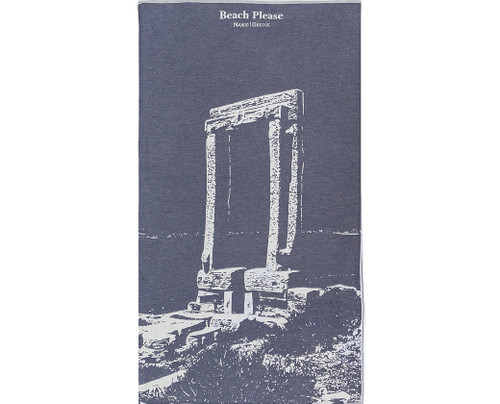 The signature "The Portara" beach towel, from Beach Please, is the absolute must have for Naxos island and history lovers alike as it depicts our local pride, and very popular must-see when in Naxos, Apollo Temple.

A gift from Naxos to follow you or your loved ones everywhere.

Its second to none design is highly visible from both sides of this towel making it ideal for double-face wear. It can be used as a beach towel, obvs, but also as a pareo or head scarf, entirely up to you!

This towel is made in Greece from 100% Cotton. While being ultra-light it has very high absorbing capabilites, which means that you will never find yourself waiting for your beach towel to dry before you leave the beach.

Naxos’ Temple of Apollo – Portara, a huge marble gate and the single remaining part of an unfinished temple of Apollo of 530 BC, is the island’s emblem and main landmark. Standing on the islet of Palatia, at the entrance to Naxos harbor, it comprises four marble parts weighing about 20 tons each.

Its construction was initiated by the tyrant Lygdamis in the 6th century BC, according to the specifications of the temples of Olympic Zeus in Athens and of the goddess Hera on Samos.

Heart of Gold in Red, Pendant in gold-plated silver